London 2016 – When the sun sets and the British capital sparkles with life from Wesminster to Canary Wharf, a murmiring dark ribbon snakes across the city. For not long though. Illuminated River revealed 6 finalist proposals for permanent installations that will shine a light on the Thames encouraging business, activity and recreation. Amanda Levete envisioned London bridges glowing with the rhythm of the tides. David Adjaye teamed with international artists to create a choral flow of lighting installations for each of the 17 bridges. Waterfall will offer screen for projections while floating platforms by the banks will become stages for performances, according to Diller Scofidio + Renfro. And more… “Since the founding of London, the mighty Thames has been the city’s main artery, linking north and south, east and west. But at night, the river  is a place that few enjoy and at odds with the ambition to make London a 24-hour city” says Hannah Rothschild, Chair of the Illuminated River Foundation”. Blurring Boundaries by Adjaye Associates. The British studio that recenlty completed the National Museum of African American History and Culture in Washington, teamed with international artists, each of whom have been charged with bringing to life the unique qualities of a single bridge. The installations are supplemented by a series of urban pavilions running alongside both banks. These pavilions provide new infrastructure capable of supporting a new pedestrian-accessible cultural hub. “When considered holistically, they join to form a cohesive stitching for London’s heart, a vibrant new epicentre anchoring the two banks” says David Adjaye.

The Eternal Story of River Thames – Amanda Levete and her team AL_A proposed a light installation that tunes with the tides. “Ever since its construction, London has been an attempt to move away from the natural forces that have defined the place. We want to reveal the river as a breathing, pulsing organism and so illuminate the age of this ancient estuary”. 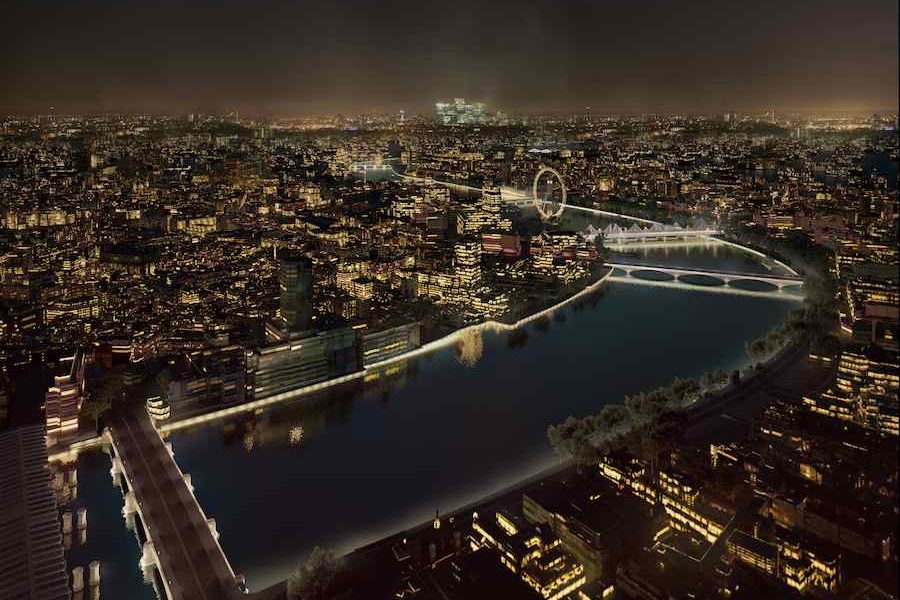 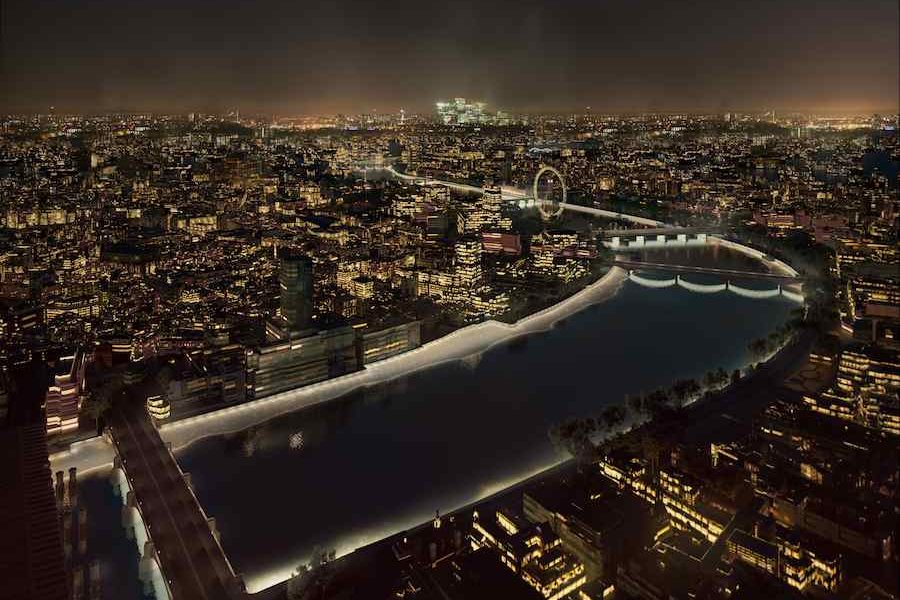 The Thames tidal range is around 9 m. When the tide is low, the underbellies of the bridges are revealed by lighting. At high tide, the lighting shifts to illuminate the elevations of the bridges. AL_A has recently completed the Maat Museum in Lisbon connecting the city with its surrounding marine landscape.

Synchronizing the City – Diller Scofidio + Renfro who is behind the design of New York City’s Highline teamed with lighting designer Jennifer Tripton to align the metabolism of London and Londoneers with “the lost pulses of nature. From twilight on, nature and culture intertwine and daylight submits to electric light”. The proposal features light beams and curtains of falling water as screen for projections. “When the sun goes down the bridges start to to fill with light” says Elizabeth Diller. “The moment that a particular moment of darkness arrives triggers a ‘night kiss’. Light beams momentarily shoot in the sky 20 seconds apart from each others according with the rotation of the Earth”.

Current – Leo Villareal, the artist who created The Bay Lights installation on San Francisco’s Bay Bridge, and architects Lifschutz Davidson Sandilands with curators Future\Pace present a transformational artwork, in three stages that “turn the Thames into a giant lava map”. “The proposal integrates light and colour on the 17 bridges, from Tower Bridge to Albert Bridge, creating a sensitive, interactive and site-specific interplay with the river”. A strategic scheme along both banks will control commercial lighting while international artists will develop kinetic installations inviting meaningful and accessible public engagement.

Thames Nocturne –  London-based architect Sam Jacob and Dutch artist Simon Heijdens proposed a romantic river of light flowing above the water. Waves of light are projected from bridge to bridge creating an ethereal volume choreographed by live data read from the Thames itself. “Within the river’s dark space, the Nocturne’s purity of light and geometry contrasts with the city’s endless variation. The Nocturne is a simple gesture showing us the richness and complexity of London’s relationship to the River Thames” say Sam Jacob and Simon Hejdens.

A river ain’t too much to light by Les Eclairagistes Associés – Sunset and sunrise trigger a progressive subtle lighting of London bridges underbellies. While different river-powered lampposts from around the world emerge from the water symbolising the international imprint of the city.

“The lampposts are the symbol of artificial lighting designed for the great cities of the world. Their reproductions create a second pathway that plots the course of the river. The switching on of the lights on the bridges is regulated to follow the ideal line of demarcation between light and shadow”.

The Illuminated River competition attracted over 100 submissions worldwide. The £ 20 million plan will be financed by private and phylantropic sources. Arcadia and Rotschild foundations have already pledged over £10 million. Until Tuesday 29 November, an exhibition at the Royal Festival Hall (RFH) showcases the six shortlisted proposals. The winning team will be announced on the 8th of December.