Church of our Savior on the Blood, St Petersburg, Russia – Photo by Jason Pitcher, CC.

Russia 2018 – Welcome to St Petersburg, the Venice of the North, “the most abstract and intentional city on the entire globe” as Fëdor Dostoevskij described it, the former Petrogad and Leningrad, or simply Пи́тер – Piter – as locals use to call it with affection.

With over 6 million residents, the second largest city in Russia embodies over three centuries of the country’s history with breathtaking architecture. Its colourful and eclectic style has evolved over time, creating a marvellous kaleidoscope of styles ranging from Baroque to Neoclassical and Style Moderne, the Russian take on Art Deco. Boat tours are popular, but if you want to admire the true beauty of the city from an unexpected perspective, why not joining a rooftop tour? Wladislav Karpyuk [+7 921 5963214] organises vertigo walks to enjoy a panorama which only local cats have the privilege to admire. Once atop, you can wave at the boat tourists below! THE CITY – Founded in 1703 by Peter the Great, St Petersburg is situated on the Neva River on the Baltic sea. Peter, a fierce and open minded king, wanted to put Russia back on the Western world’s map of and tune it with the spirit of the times. That’s why he forced Moscow’s aristocracy to emigrate and literally bring stones to build their own palaces. Where there once was a swampland, an imperial capital was born. Here, the Romanov dynasty ruled for over two centuries… Until october 1917, when over 250.000 people gathered in Dvortsovaya square to start off the Russian Revolution. Our architectural tour starts from here. Like Tiananmen Square or the Waterloo fields, the Palace square – Dvortsovaya ploschchad in Russian – is one of those sites where history’s turning points unfolded. The plaza was designed to show off all the pomp and grandness of the Russian Empire. At its center the 47.5 m tall Alexander Column by August de Monferrand – 1830 – celebrates the victory of the Tsar over Napoleon in 1812. On the southern side, the Building of the General Staff embraces the plaza with two wings separated by a tripartite triumphal arch topped by a sculpture remembering, again, the glorious victory on Napoleon. Designed by Carlo Rossi in 1820, the building hosts in its easter wing the XIX and XX century collections of the Hermitage. Stunning historical interiors alternate with contemporary architecture to showcase masterpieces of the Impressionists, Post Impressionists, Picasso, Matisse and the Russian Avantgarde. 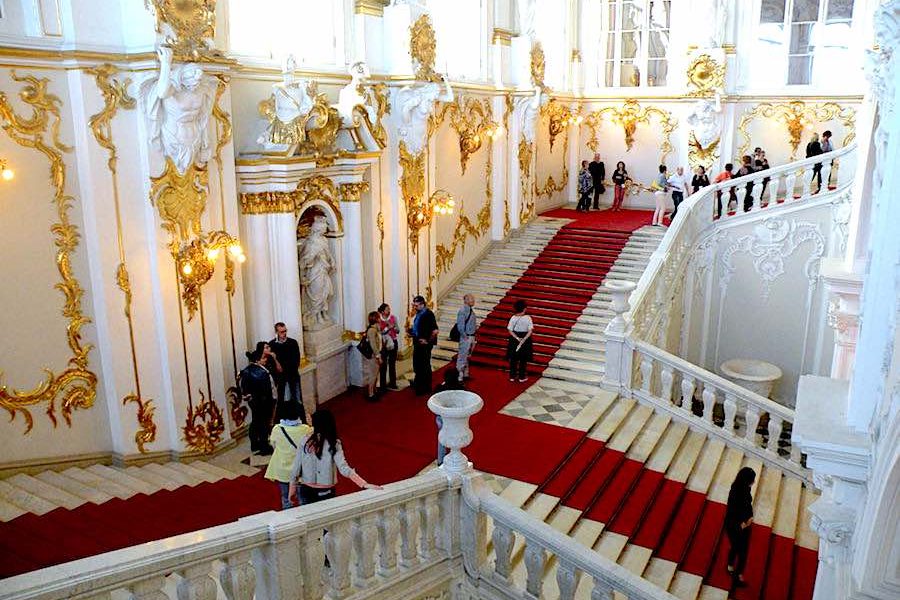 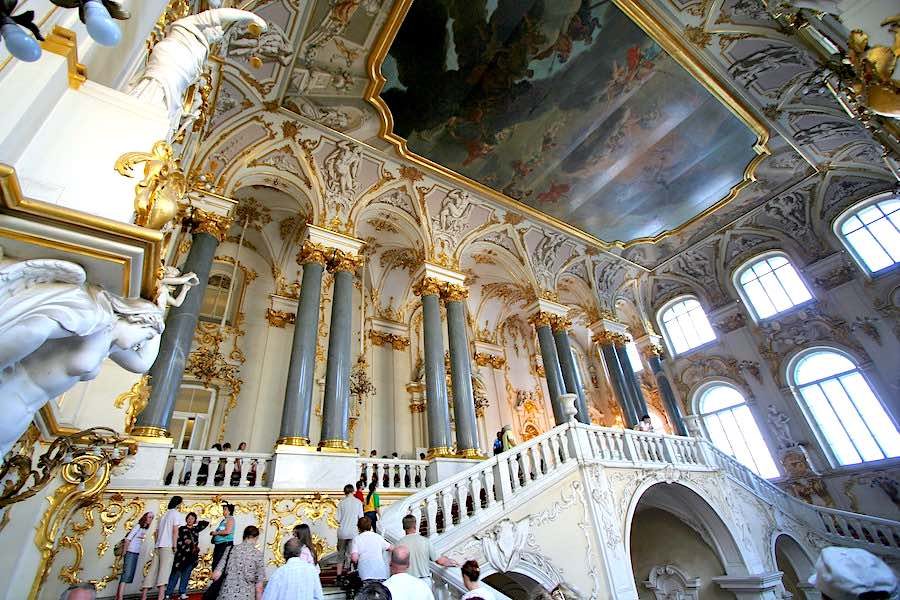 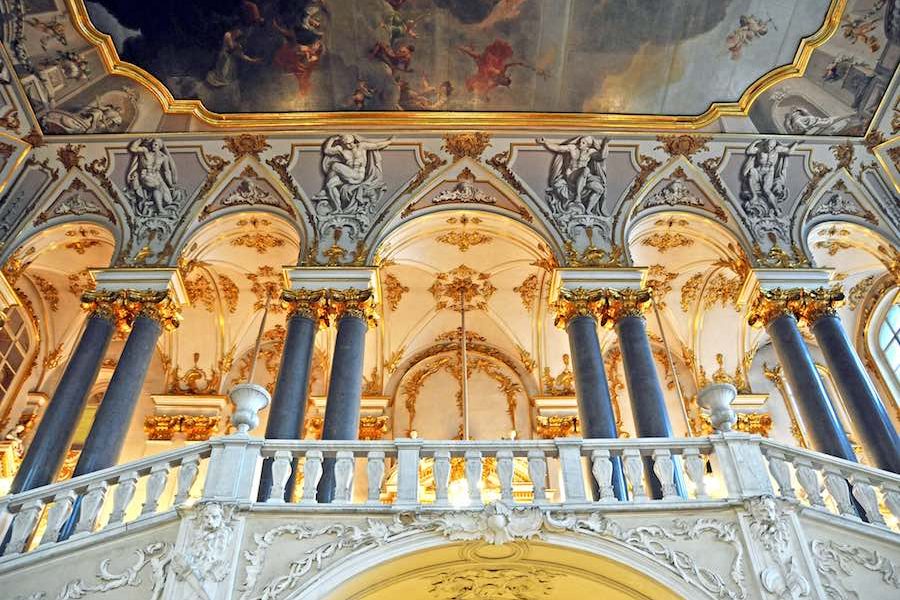 As the second-largest art museum in the world, The Hermitage is rightfully the very first destination of St Petersburg’s first visitors. The museum occupies the Baroque Winter Palace and other adjacent buildings on the northern side of Dvortsovaya ploschchad, as well as other venues across the city. Commissioned by the Empress Elisabeth to Italian architect Bartolomeo Rastrelli, the Winter Palace became the very first public museum in Russia. The 215 metre-long facade is a white and green triumph of columns, windows and statues intended to reflect the might and power of Imperial Russia. Inside, the museum offer a pantagruelic buffet for art bulimics starting from the mesmerising Scalone Giordano by Rastrelli. The collection ranges from prehistoric tombs and manufacts to Leonardo Da Vinci’s Madonna with Child, from Rafael, Canova and Rembrandt’s masterpieces to a Hall of Fame of Flemish art. Make sure to visit fairytale ballrooms and concert halls, Caterina the Great’s roof garden, two Halls of the Throne, the Romanovs’ private apartments and the chapel where Tsars said YES to their future wives. Find the bust of a grumpy Napoleon which seems to look away from the greatness of the country that defeated him, and the portrait of the last Tsar Nicolas II which was reused to portrait Lenin on the other side. Discover stunning Art Deco publications, a mechanical gold Peacock-Clock and Italian Arte Povera.

It takes over an hour to walk along Nevsky Prospect. The 4.5 km long avenue connects the Winter Palace to Moscow Railway Station and the Alexander Nevsky Monastery. The feverish life of the avenue was described by Gogol and Dostoevski. Neoclassical churches alternate with Baroque Palaces, Art Nouveau buildings and literary cafes… But also fashion boutiques, historical shopping centers, MacDonalds and promiscuous basement-clubs. It was here that the enraged march heading to the Winter Palace took shape in 1917, it’s here where tourists, street musicians and locals gather to create a non-stop bustling wave of people. Statue of Catherine the Great in Ostrovskogo ploshchad – © Archipanic.

Start at the Anichkov Bridge with four rampant horses tamed by men, stop in Ostrovskogo ploshchad to admire the grand statue of Catherine the Great – with all her lovers sculpted at her feet – and the Russian National Library. Then head to Bolshoy Gostiny Dvor, one of the oldest department stores in the world which was designed by Rastrelli in 1785 and the humble and recently restored St. Catherine’ Armenian Church, one of the earliest Armenian churches in town. The Kazan Cathedral is not understated partly inspired by St. Peter in Rome, it features a semi-circular colonnade embracing a garden on Nevsky Prospect. On the other side of the street, admire the Style Moderne Singer Palace, the iconic sewing-machine company’s building is topped by a glass and bronze dome held by slender statues. Other notable buildings are the City’s Duma Tower and the Art Nouveau Elisseeff Emporium building.

Explore the Baroque triumph of the Stroganov Palace – one of St Petersburg most influential noble dynasties who, despite its wealth, is todays’ mostly known for their chef’s most fortunate recipe. Actually, the family had quite a beef with the Bolsheviks who forced the Stroganovs to emigrate and nationalised all their properties. Visit the stunning interiors of the palace, kind of giving to the Stroganovs what is the Stroganovs’. Church of the Saviour on Blood – Photo by rdesign812, CC.

The Church of The Resurrection of Jesus Christ, a.k.a. Church of the Saviour on Spilled Blood, is the most iconic and instagrammed holy building in town. Quite rightfully, as it was design to stun for generations. Indeed, it took 24 years to build it at a monstrous budget for the times, and 27 years to restore it. The nickname is due the fact that the church is located where Alexander II was heavily wounded in a terroristic attack. Designed by A.A. Parland, the cathedral celebrates traditional Russian architecture with colorful revivalist domes, inside 7.000 sqm of mosaics span across the vaults and the pillars. Church of the Saviour on Blood – Photo by svklimkin, CC.

The St. Isaac’s Cathedral is the largest orthodox basilica and had a turbulent construction site too as it took 50 years to complete it in 1958. The cathedral was commissioned to Auguste Montferrand who was heavily opposed by locals architects as he wasn’t neither Russian neither an architect; the building blends Neoclassical, Byzantine and Greek style. The front colonnade is composed of 22 m tall columns, each weighting about 80 tons. Enjoy a 360° panoramic view under the Dome cladded with over 100 kg of gold leaves.

At the very end of the Nevsky Prospekt, the Alexander Nevsky’s Lavra is the city’s holiest and oldest epicentre hosting a large monastic complex dedicated to the Prince who defeated the Swedes where Peter the Great founded St Petersburg. The site hosts the the Neoclassic Cathedral of the Holy Trinity, two baroque churches, designed by father and son Trezzini, the monks residencies and several historic cemeteries where Dostoevsky, Tchaikovsky, Lomonosov and some of the most illustrious city’s citizens rest in peace. Almost all the tsar are buried in the St Peter and Paul’s Cathedral within the Peter and Paul’s Fortress on the Petrograd Island. Completed in 1733 by Domenico Trezzini, the building features a 123m high belfry with a golden spire topped by an angel holding a cross. Inside the tombs of Peter the Great and Caterina the Great are located in front of the iconostasis on the right hand side while the last Tzar Nicholas II and his family rest in peace in a chapel by the entrance. Other notable holy architectures are the Kazan Cathedral and St. Caterine’s Armenian Church on the Nevsky Prospect – see the dedicated chapter -, the blue-and-white Smolny Convent of the Resurrection which was completed by Rastelli in 1757 and features baroque onion domes and St  Petersburg Mosque on the Petrograd Island. Inspired by an emir’s mausoleum in Samarcanda, it features a stunning dome with turquoise and slender minarets. Neoclassic, Style Moderne and Baroque palazzos flank the canals of the city while picturesque bridges – most in Russian – offer romantic photo-opportunity. Livny most is guarded by two couples of lions, Panteleymonovsky is topped by regal street lamps while Bankovsky most features griffon with golden wings. Walking along the Nevky Prospect, it’s impossible not to notice the four rampant horses tamed by men on the Anichov most. The islands of Vasilyevsky, Petrograd and Vyborg are connected by scenographic large drawbridges which open at 1 am to allow maritime traffic. Make sure to be on the right side of the island at the right time, as they close again at 5 pm. The Dvortsovy most behind the Winter Palace opens with music and light shows, manage to get there at least half an hour before to gain a good spot. The great buildings along the Nevsky prospect are just the tip of an iceberg. Visit imperial palaces, castles and even pompous “crime scenes” palazzos. Here some of the most stunning ones. The Menshikov Palace on the Vasilyevsky Island was the first stone building in town. It’s owner, the General Alexander Menshikov, was Peter the Great best friend, and St Petersburg first governor. The ballrooms and halls show the pump of a very young European capital.The Mikhailovsky Castle was originally built as a medieval castle in the XVIII century. Surrounded by a moat, it hosts part of the Russian Museum collection. Other notable buildings are the Yusupov Palace where the infamous Rasputin was murdered, the Art Deco department store Au Pont Rouge with a recently restored ‘30s dome overlooking a picturesque red bridge and the majestic Mariinsky Opera House which premiered Tchaikovsky’s Swan Lake and The Nutckracker. Surrounded by St Petersburg’s more charming and old gardens, the Summer Palace was the Tzars residence during the good season. Do no miss the Fabergé Museum, located in the recently restored Shuvalovsky Palace by the Anichov Bridge. Sennaya Ploshard’s recent development did not brushed away the traits of the St Petersburg Fedor Dostoevsky described in Crime and Punishment. Cross the square and venture in the nearby alleys between Sadovaya ave, the Fotanka and Moika canals. The famous “alley S.” where the book’s protagonist Rodion Raskolinkov used to live is actually on Stolyarnyy per. Here, at the corner with Kaznacheyskaya an inscription reads: “The tragic fate of the people of this area of St Petersburg formed the foundation of Dostoevsky’s passionate sermon of goodness for all mankind”. • RELATED STORIES: Read more about architecture and design from Russia and discover the best contemporary architecture of other world capitals such as Tokyo and Rio De Janeiro…