UAE – Jean Nouvel’s Louvre Abu Dhabi extends out in the Persian gulf seemingly floating above the water. The $ 650m project invites visitors to explore art across eras and cultures offering a universal – and not just Western – perspective of human development. Visitors are sheltered by a magnificent dome “at the intersection of mathematics and organic life” which provides shade to a cluster of floating galleries. “The layered dome pays homage to the vital importance of shade in Arabia. At the same time it filters the light to create a kind of cosmic calligraphy of imaginary forms” explain at Louvre Abu Dhabi. Weighing 12.00 tonnes – almost like the Eiffel Tower – the highly engineered structure measures 180 meters in diameter and is composed of different layers creating complex geometric patterns. Rays of light penetrate the layers before appearing and then disappearing. The result is a cinematic effect as the sun’s path progresses throughout the day. At night, it forms 7.850 stars visible from both inside and out. 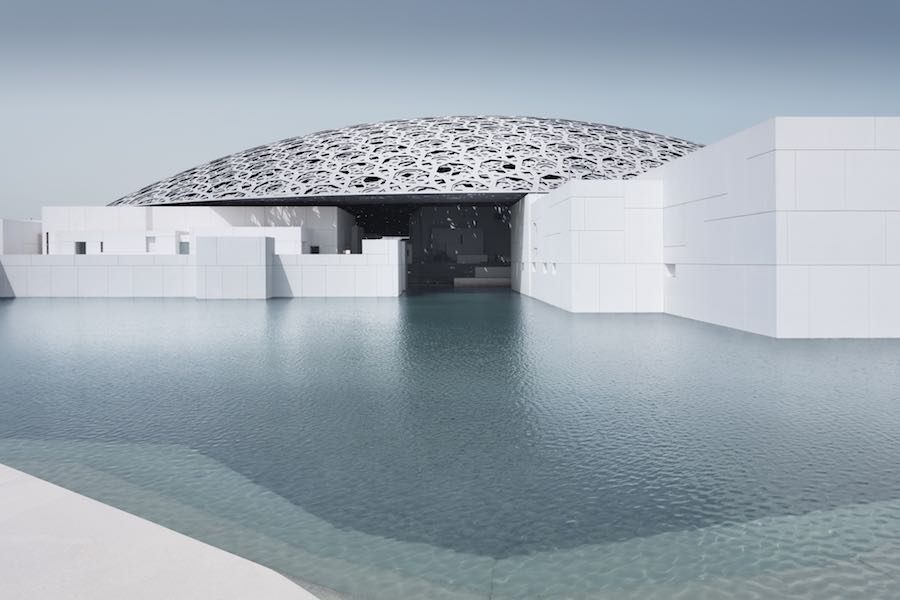 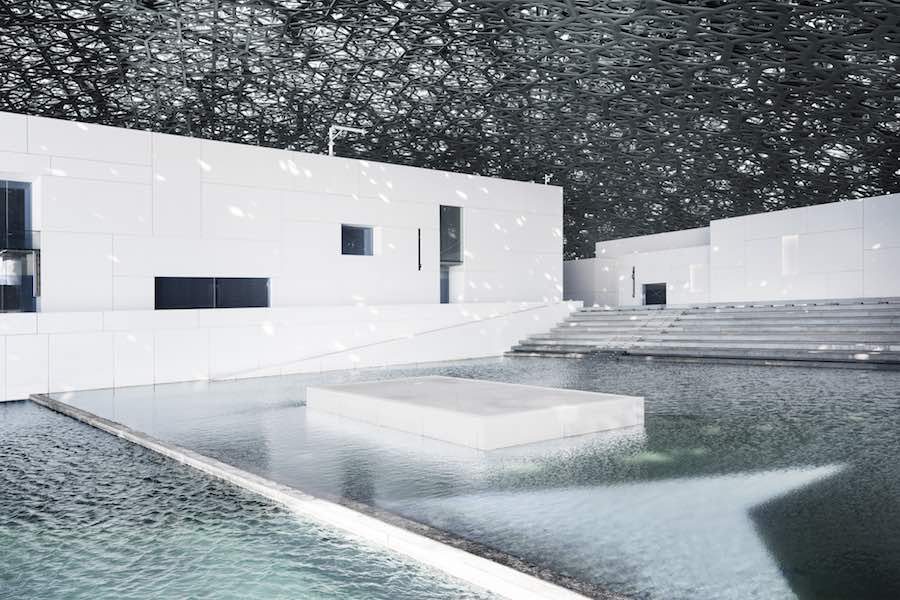 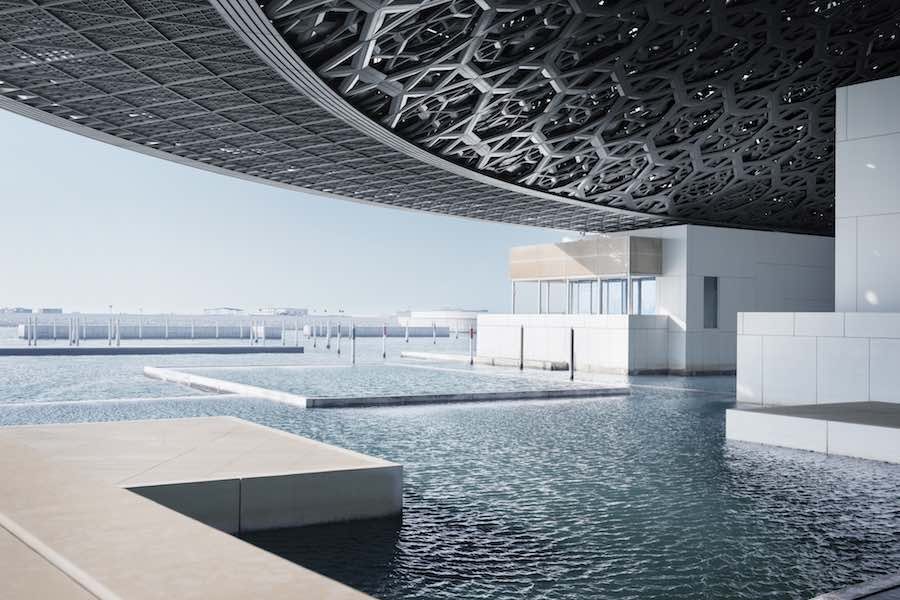 “Like the stars that guide the nomad in the desert, Jean Nouvel’s dome invites us to look up and contemplate our world.” Says Jean-François Charnier, Scientific and Cultural Director of Agence France-Muséums. “Louvre Abu Dhabi is a universal museum, in our age of globalisation. Its galleries offer visitors a vast historical fresco of art from around the world, from across eras and cultures.”

Nouvel designed Louvre Abu Dhabi as a ‘museum city’ in the sea. Its contrasting series of white buildings take inspiration from the medina and low-lying Arab settlements. In total, 55 individual buildings, including 23 galleries, make up this museum city. The façades of each buildings are made up of of ultra-high performance concrete panels.

Curators decided to remove the traditional partitioning of museum departments to show what the artefacts have to say in a different—and more universal—light. “How else could we show the remarkable similarities between the Sumerian priest-kings and the pharaohs of Egypt, the reciprocal influences between China and the Islamic World, and the effects of the expansion of industrial civilisation?” Louvre Abu Dhabi was born from a unique intergovernmental agreement between the UAE and France. As an independent institution, it includes the use of Musée du Louvre’s name for 30 years and 6 months. As per the intergovernmental agreement, Louvre Abu Dhabi will also have invaluable access to expertise and training from 17 French partner institutions, as well as loans from 13 leading French museums such as Centre Pompidou, Musée d’Orsay, Chateau de Versailles, Bibliotèque National de de France and more. They will all support with programming special exhibitions and events for 10 and 15 years.

“All climates like exceptions. Warmer when it is cold. Cooler in the tropics. People do not resist thermal shock well. Nor do works of art. Such elementary observations have influenced Louvre Abu Dhabi. It wishes to create a welcoming world serenely combining light and shadow, reflection and calm.” Explains Jean Nouvel.