The final season of Game of Thrones kicked off. “If you’re asking an audience to believe in dire-wolves, dragons, and giants, you need the world to be as believable as possible,” says Deborah Riley, production designer and art director of the acclaimed HBO series.

In the past 10 years, the Australian designer and architect has been globe-trotting in search of stunning locations and architectural inspirations to conceive and create the worlds of the TV series where demons and knights fight in spaces which actually exist – or existed – in the real world. Game of Thrones is inspired by the George R. R. Martin’s saga A Song of Ice and Fire. It narrates the geopolitical intrigues of a fantasy world where seven kingdoms battle for power with dragons and black magic while an army of undead creatures threats the world order from the North.

The architectural imprint of Game of Thrones unfolds in the titles which show lofty castles, bustling ports and vibrant cities raising from a map.

We rounded up some the most stuning architectures of the iconic series ranging from the Iron Bank, Kings Landing and more…

Mothers of Dragons (and surfers) shored in Norther Spain In the Bask region, the spectacular beach of Itzurun is a hotspot for surfers anms Mothers of Dragons. Here jagged sedimentary cliffs create a dramatic natural architecture located just across a tiny fishing harbour.

One of the most stunning location of the series is San Juan de Gaztelugatxe in Northern Spain, not far from Bilbao. A hermitage on top of a hill is connected to the mainland by a winding footbridge. The coast has been touted as a potential landing point for Daenerys and her Unsullied/Dothraki army. Other locations in Spain include the Castle of Almodóvar del Río in Cordoba and Seville Royal Dockyards, a 13th century medieval shipyard with catacomb-like interiors. Expect to see sword wielding and blood at the Roman-age amphitheatre of Italica, a greatly preserved archaeological site in Santiponce. Kings Landing, one of the epicenters of the saga housing the Lanister breed, was mostly filmed in in Malta. The warm coloured stones and clifftop fortifications of the island were utilized for the show’s most urban setting. Perched on rocks above the waves of the Mediterranean Sea, the city of Dubrovnik, Croatia, inspired the masterplan of Kings Landing. Numerous real-world settings for the the palace where the iconic Iron Throne stands were shouted at Fort Lovrijenac, a castle located atop a 125-foot-high cliff and featuring walls up to 40 feet thick.

Braavos: Nazi interiors, Venician canals and the Colossus of Rhodes

The Braavos urbanscapes were conceived meshing Venice with the medieval town of Šibenik in Croatia. The Colossus of Rhodes, one of the seven ancient 7 Wonders of the World, inspired the monumental statue standing at the entrance of the fictional city’s bustling harbor. 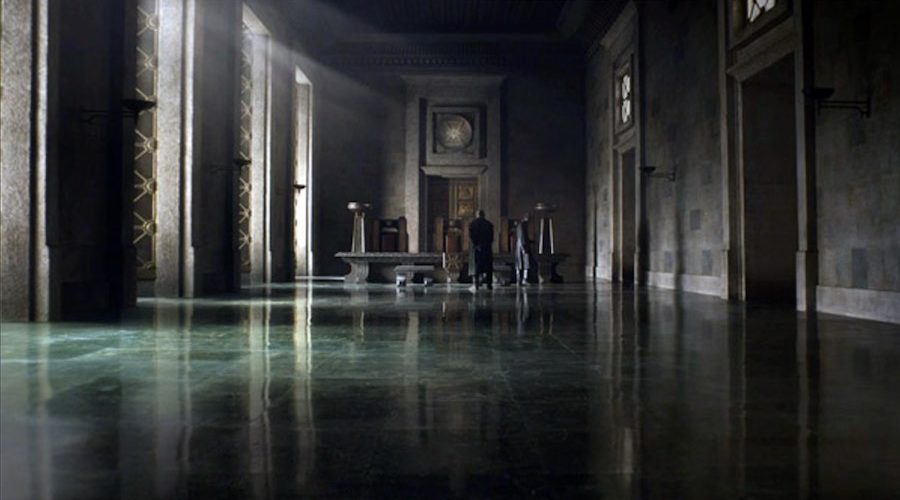 The austere palaces of Bank of Braavos which will stage key scenes of the upcoming season were designed starting from the ominous features of Third Reich architecture. “The question was how to bring the intimidation of Albert Speer’s architecture into the world of these bankers” said Riley to Curbed. Frank Lloyd Wright’s Mayan revival architecture for the Textile Block Houses in Los Angeles inspired the setting of Daeneris Targaren’s palaces in Eesteros. “These buildings have a certain domesticity to them, but they also felt sort of monolithic and ancient at the same time. There’s a sense they could be inside a pyramid” said Riley. 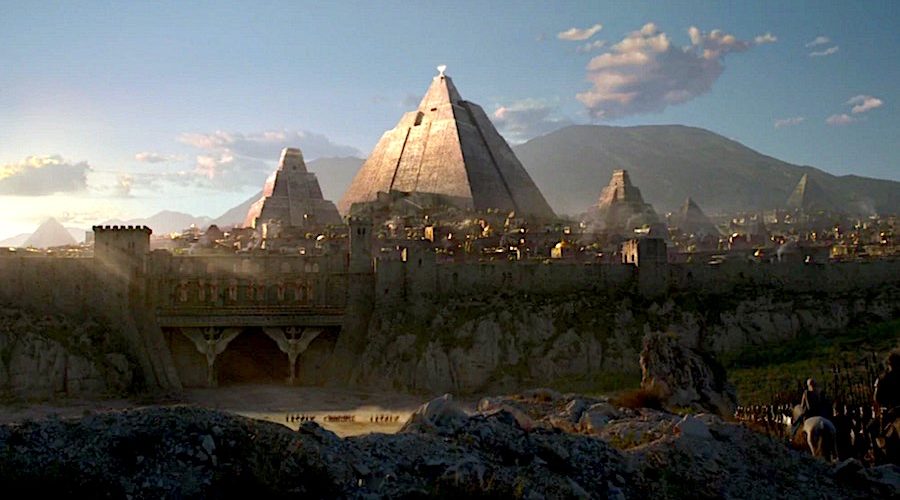 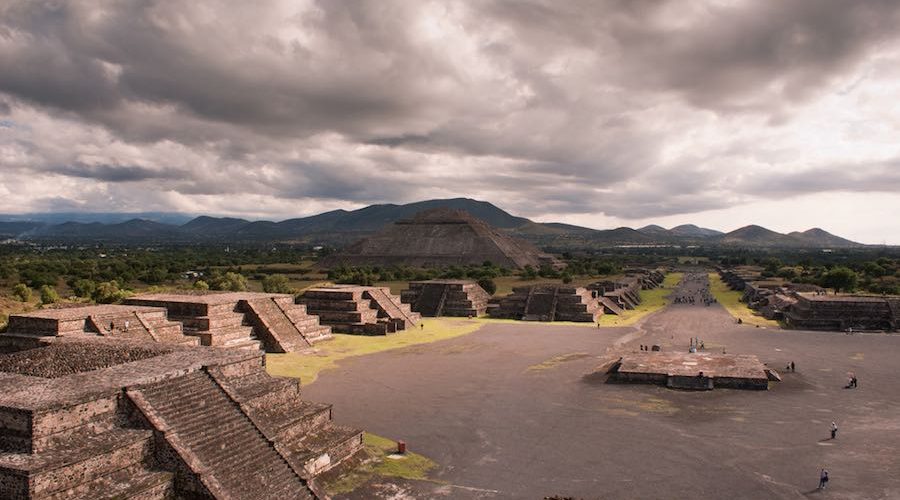 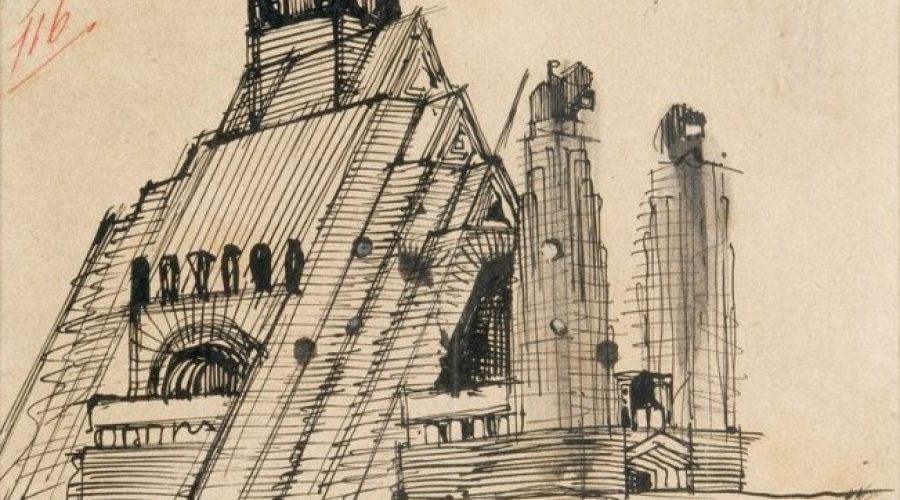 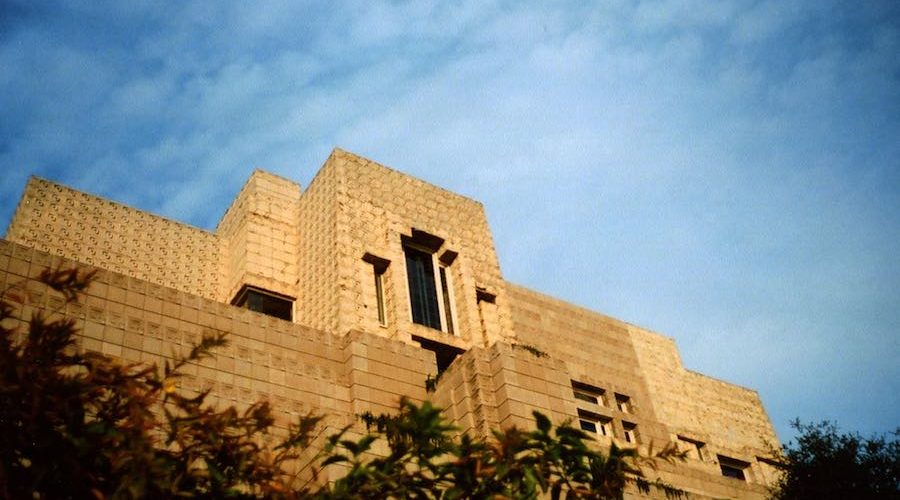 The Pyramidal palaces are a mesh between Mayan Pyramids and Antonio Sant’Elia. Many of the scenes in Essos, the Eastern continent of Games of Thrones, where shot between Spain, Morocco and Croatia.

The Northern Wall: Icelandic glaciers, quarries and a lot of computer graphics The Northern Wall – Photo via Game of Thrones Wiki.

The gigantic barrier separating the seven kingdoms from the evil wilderness of the NORTH collapsed at the end of the 7th season. But it doesn’t exist in the real world and it was digitally created. Still, a blood-thirsty undead army will ber croosing borders in the final season.

But Castle Black and some parts of The Wall can be found at Magheramorne Quarry in Northern Ireland – though CGI helps. The frozen wastes beyond were shot in Icelandic national parks and glaciers.